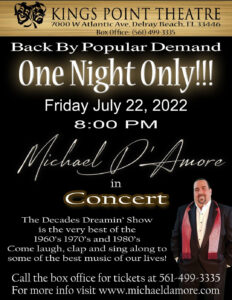 With a fun-filled show that relives the music of our lives, Michael D’Amore will take you on a guided tour of some of the most iconic music from the ‘50s through to the ‘80s. Coming from a musical family, singer/songwriter Michael D’Amore was born to entertain and he has been doing it so well for over thirty-four years. In 2020 he was honored as a nominee for Male Vocalist in the East Coast Music Hall Of Fame. He is a featured performer with Expedia Cruises where he performs everything from Frankie Valli to Whitney Houston and Barry White. Also known as the current lead singer of The Capris, he can be heard performing their hit songs There’s A Moon Out Tonight and Morse Code Of Love wherever they appear. Michael has opened and also shared the stage for such famous names as Lou Christie, The Lovin’ Spoonful and Kenny Vance and the Planotones.

My name is Jeff. I was born and bred in Brooklyn, New York. Since 1991, I have lived in South Florida and have eaten in so many restaurants down here, that I now consider myself to be a food expert. END_OF_DOCUMENT_TOKEN_TO_BE_REPLACED