Jeff Eats and Mrs. Jeff Eats have seen DiBitetto a number of times and I’m telling you guys- that he will have you crying from laughter all night long! 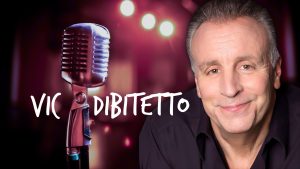 The Italian Hurricane. His pace is frenetic. He holds no hostages. He says what you are thinking but are afraid to say out loud. The bottom line is this: Wear adult diapers if you are going to see Vic DiBitetto perform live.
· 1.2 million followers on social media
· An internet sensation with over 500 million video views worldwide
· Regularly featured on the nationally syndicated daytime TV show Right This Minute
· Currently the Host of Vic’s Picks, a digital TV show for Hearst Digital/Entertainment
Vic has created many viral video characters like Tony Gaga, That Guy, Frankie Pentangelli, Fool by the Pool and Ticked Off Vic. His Yankee and Giant locker room satires are now legendary. And his Bread and Milk video is like a Christmas Carole that comes back on TV, radio and news outlets every time it snows almost anywhere in the world.
Trust us. You’ve never seen anything like Vic DiBitetto on stage. Vic DiBitetto…blue collar comedy.

My name is Jeff. I was born and bred in Brooklyn, New York. Since 1991, I have lived in South Florida and have eaten in so many restaurants down here, that I now consider myself to be a food expert. END_OF_DOCUMENT_TOKEN_TO_BE_REPLACED