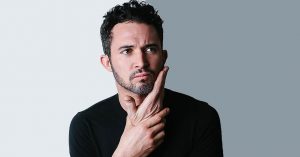 Definitely- without doubt one of the best magicians that Jeff Eats and Mrs. Jeff Eats have ever seen!

Justin Willman, star and creator of the Netflix original series Magic for Humans, has been hailed by the L.A. Times as, “A new breed of comic who’s making magic cool again for grown-ups. ” Playboy dubbed him, “The freshest and funniest magician working today.” Time Out says his live show, “Has to be seen to be disbelieved.”

He’s a regular guest on The Tonight Show, Ellen, and Conan. His online videos have logged over a 100 million views. One time he performed at the White House for the Obama family! Justin is also a consultant & writer for film/television productions like America’s Got Talent, The Goldbergs, and Disney’s upcoming feature film Magic Camp.

The VIP package includes a premium ticket and post show meet and greet with Justin Willman.

My name is Jeff. I was born and bred in Brooklyn, New York. Since 1991, I have lived in South Florida and have eaten in so many restaurants down here, that I now consider myself to be a food expert. END_OF_DOCUMENT_TOKEN_TO_BE_REPLACED